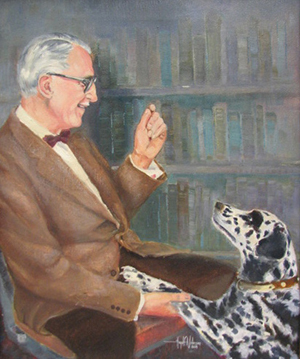 Items in Case Library must be used in the Jacket Legacy Room during the Library Renovation and are available to students, faculty, and staff, as well as the general public.

Published materials in Case Library can be found by searching the library catalog. To browse or search archival collections, visit our Archival Finding Aids page. Materials from selected collections have been digitized and are available through the Digital Library of South Dakota.

Case Library accepts donations of both published and unpublished materials, particularly those which relate to the history and culture of the Black Hills and of western South Dakota. Please visit the Friends of Case Library page for more information.

Leland Davidson Case (May 8, 1900 - Dec. 16, 1986) first came to the Black Hills at the age of about 9, living in Sturgis, Hot Springs, Spearfish, and Rapid City, with a year spent in Mitchell, South Dakota. After graduating from Rapid City High School, he enrolled in Dakota Wesleyan University, but eventually received a bachelor of arts degree from Macalester College in St. Paul, Minnesota, in 1922. After a year spent teaching, he returned to Rapid City where he began his career as a journalist. He went on to enroll in the Medill School of Journalism at Northwestern University in Chicago, where he earned a master's degree in 1926. His journalism career included a 20-year stint as editor of The Rotarian. His active interest in American history led to his role as co-founder of the Westerners, a group interested in western lore, history, and camaraderie. In his retirement, Case was looking for a home for his personal library of approximately 5,000 volumes. He contacted Black Hills State College where the new library named for E. Y. Berry was being completed. President Freeman was very much interested, and Case ultimately donated his library along with an endowment in 1974. The Leland D. Case Library for Western Historical Studies was dedicated April 30, 1976. The book collection has been added to through purchases and donations and now contains over 21,000 volumes. Archival collections, numbering around 200, have been donated to Case Library by individuals and organizations.