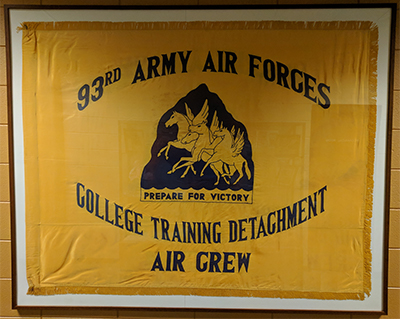 The Flag of the 93rd Army Air Forces College Training Detachment (Air Crew) is temporarily off display due to the Library Renovation. It was donated by the Family of Neil L. King in the name and memory of Major General Homer I. "Pete" Lewis, USAF (Ret). The flag is part of the Neil Lyon King and Joan Sunderland King Collection. The collection also includes photographs related to the 93rd which can be viewed by request in the Case Library Reading Room (room 201).

In order to train pilots, navigators, and bombardiers for World War II, the Army Air Forces (AAF) created the College Training Detachment program, or the CTD, in early 1943. As part of the CTD program, the AAF contracted with 150 colleges and universities to offer five months of education and training courses. The AAF cadets took classes in military training taught by AAF personnel, as well as classes in math, physics, history, geography, and English, which were taught by civilian college faculty members. Aviation cadets would also learn basic flying instruction from local civilian pilots. 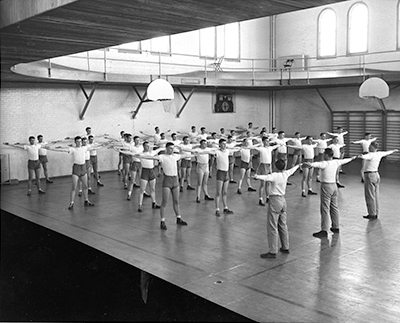 Black Hills Teachers College, now Black Hills State University, was one of the colleges selected for the AAF CTD program. It became known as the U.S. Army Air Forces 93rd College Training Detachment (Air Crew). More than 1,000 cadets attended the CTD training at BHTC, which was the only college selected for this program in South Dakota. During the training program, from March 1943 to May 1944, the cadets lived in Wenona Cook Hall and took classes in Woodburn Hall.

Lieutenant Neil Lyon King served as Adjutant and Personnel Officer beginning in February 1943 and assumed command of the 93rd in March 1944 upon the transfer of Captain Lewis.

During his time at Black Hills Teachers College and in Spearfish, King met and married Joan Sunderland. Their son, Terry Neil King, presented the flag of the 93rd to Black Hills State University and President Dr. Tom Jackson, Jr., on April 3, 2018.


Members of 93rd with Airplane 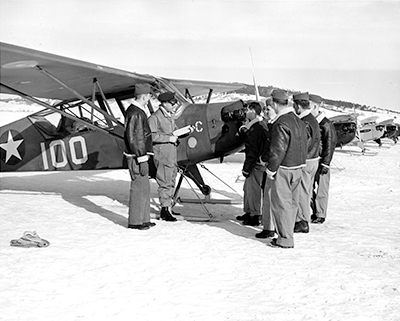 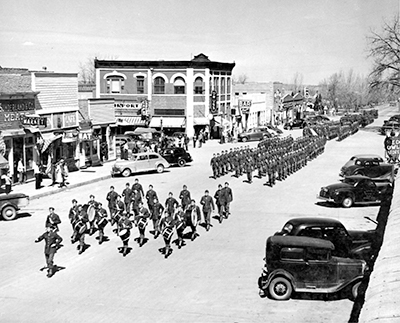