Researched and compiled by William Loveday


History of the ROTC Program as a Whole

The modern-day military Reserve Officers' Training Corps (ROTC) program was created through the National Defense Act of 1917. This act also established the modern-day Army Reserves and National Guard. It was designed to provide the United States Army with a larger pool of officers than what was traditionally provided by the military's service academies. Although this act created the modern-day ROTC program, there were some instances of earlier ROTC-like programs existing all the way back to the days of the Civil War and pre-World War I times. It was the United States' entry into World War I and its experiences therein that made this program a necessity in order to quickly establish a larger pool of officers for a rapidly expanding military. At the time, military service academies, such as West Point, only graduated a small batch of officers each year. ROTC programs helped to greatly expand the opportunities for those who were interested in military service. 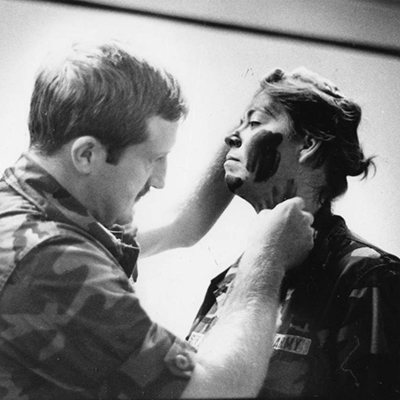 Cadets marching in for ROTC ceremony 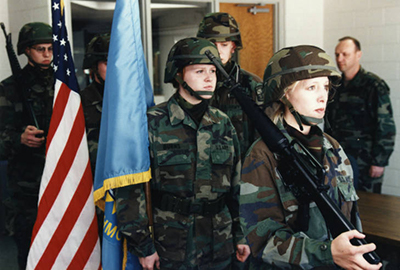 Now that we know about the history of the ROTC program as a whole, we will now delve into the history of our very own program here at Black Hills State University. 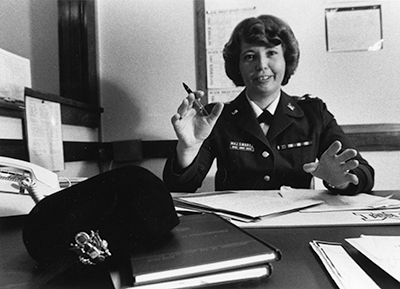 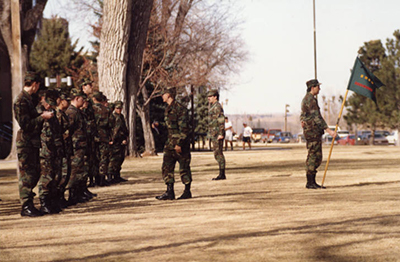 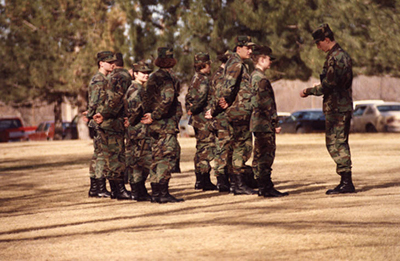 During World War II the institution that we now call Black Hills State University (BHSU) was home to an Army Air Corps training detachment from 1942 to 1944. After the training program left there was no ROTC program or anything similar until the 1970s. BHSU’s ROTC program started in 1973 with several students and then continued to grow. This program was at first a satellite program of the South Dakota School of Mines and Technology ROTC program. Faculty that ran both programs were shared between the two universities. Then as time went on, in the 1980s the program continued to grow and became more of a full-fledged extension program. Today at BHSU there are over 50 cadets with around 10 graduating each year. Even though the ROTC program at BHSU has grown, the South Dakota School of Mines and Technology’s ROTC program is still the command detachment of the Mt. Rushmore battalion. That organization is comprised of the South Dakota School of Mines and Technology, Black Hills State University, and Chadron State College. Even though BHSU’s ROTC program is only a part of the larger organization, its successes over the years have served as an example and allowed for the creation of a similar program in Chadron State College at Chadron, Nebraska. The future was not always so bright. In the late 1980s enrollment started to drop off and there was even very serious consideration of shutting down the ROTC program here at BHSU. But, after much deliberation and lobbying by influential members of South Dakota’s state and federal representatives, it was decided that the program was worth saving. After that the program began regaining enrollment numbers and the positive impact the ROTC program has on BHSU continues to this day.

Over the course of many years that BHSU has had an ROTC program there have been changes made to the program. These included class names and content changes based upon the needs of the University.

Early example of ROTC's course description in the mid 1970s 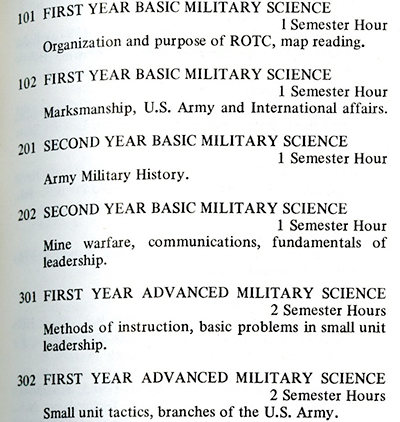 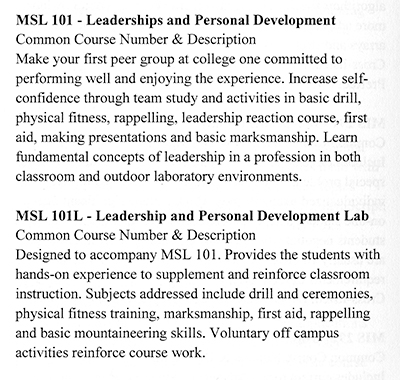 Earlier components of ROTC training involved learning how to fence 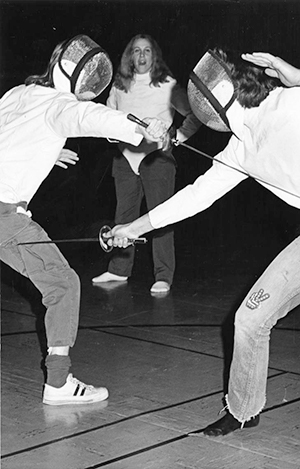 How ROTC has Changed Over the Years 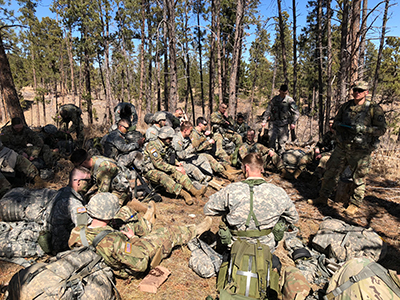 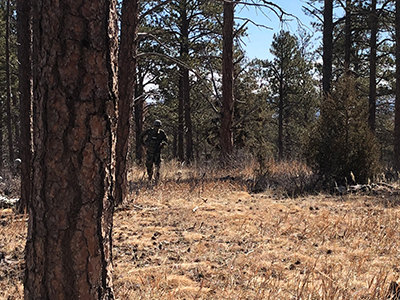 Over the years the program has gone through a number of changes. The most significant is the changing focus of making the program more interesting to a larger part of the student body. Since this program is voluntary, there is a great need for making the program a very positive experience. The way that this is done is by concentrating the training exercises during the spring and the fall and keeping the students more academically engaged in their other classes. Also, the integration and preparation for training that is done in the classroom is to ensure that when the cadets go out and do a training exercise, they have a better understanding of the purpose of the training. This approach gives the program the best possible chance of retaining the highest number of cadets while ensuring that more cadets are interested in pursuing the program to its full extent. Aside from the components of the program changing the overall mission of the ROTC program has not changed. Its goal is still to introduce and train college undergraduates to become high-quality officers of the United States Army. The changing peripheral needs of the Army can and do change which is where the flexibility in the program lets the cadets become well rounded and capable of any task that they are given.

Most people are very curious about the ROTC program and what some of the unique features are, besides the normal classroom experience that all college classes have. However, even the normal in class work that is done is unique, because the classes discuss the history of the United States Army and what it means to be a future officer in this institution. These classes once completed will earn the cadet a minor in Military Science. In doing so the Army promotes diversity in the future leaders of its soldiers. There are also out of class events that truly distinguish this program from just any other ordinary class. These events are the Dining Out event, various survival training workshops, such as a water survival training exercise, field training exercises, the Ranger Challenge, and the commissioning ceremony. 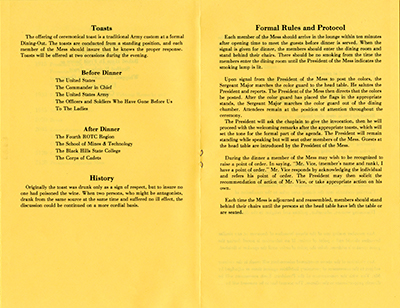 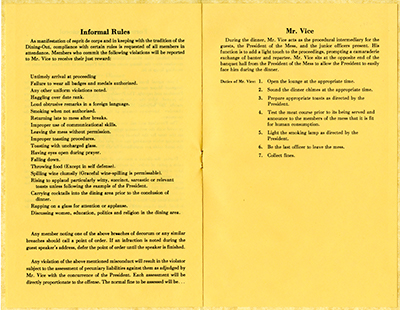 The Dining Out social event is typically held in the late fall or late spring. It is used to celebrate all that is occurring and create a sense of comradery and good cheer among the cadets. The esprit de corps of the event also helps introduce some of the traditions and the history of the ROTC program, as well as that of the United States Army. Some of these are the role of Mr. Vice who is in charge of insuring that the evening goes smoothly and overseeing the Grog punch bowl, for those who have been found guilty of minor faux pas and infractions during the event. This formal event gives the cadets a chance to introduce their significant others to the program and give a preview of what is to come if the cadets decide to join the Army as officers. Also, distinguished visitors are invited as a way to showcase the accomplishments of the cadets. The event further serves as a way for the cadets to be inspired by the accomplishments of themselves and others. It also serves as an evening to socialize with their peers and have some enjoyment and entertainment. It started around the time of World War II by the British to have an evening of welcoming American military personnel for good humor and good cheer. This tradition goes hand-in-hand with the idea that if you work hard, you will be rewarded for following through on the task assigned.

Cadets enjoying their Dining Out experience 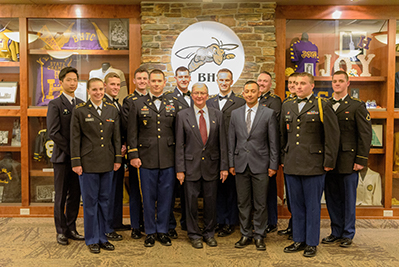 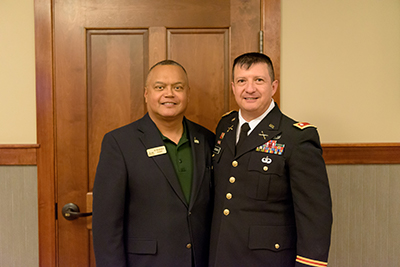 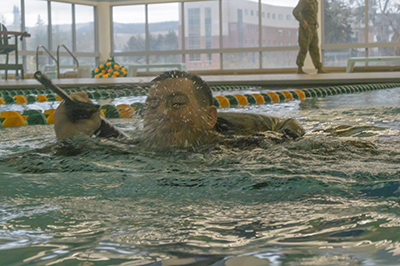 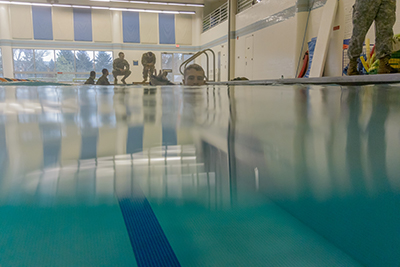 Now the cadets have had some fun, it's back to training which sometimes involves learning different skills than what they might normally have to face on the battlefield. This is due to the uncertain future that we live in. The future officers of the US Army are required to be able to fight and win no matter what task they are given.

This is one of the water combat survival classes that the cadets undergo. This is done in order to show that they are soldiers who are able to be thrown into situations that they might not be typically involved in. However, these specialized training courses are vitally important for them to be able to understand how to survive in such circumstances, so that they can fight and lead the soldiers under their command in order to complete the assigned mission directives. This is because the current and future battlefields that these cadets will have to command are ever-changing, which is why the training must be flexible and all encompassing. 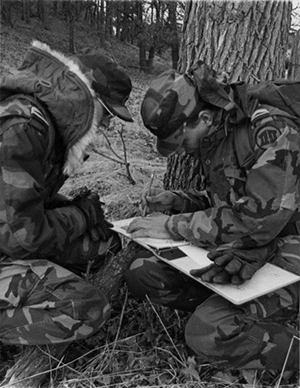 The Field training exercise (FTX) also known as the Fall training exercise, and the spring training exercise (STX) are some of the main training exercises that the cadets undergo to physically put the cadets in the training simulations. This is to give them practical training and the ability to apply the concepts and the knowledge that they learned in the classroom, so that they are able to demonstrate that they are proficient in the standards of military training. They will need to master these standards to be capable and knowledgeable officers in the US Army when they graduate. Some of these training procedures that they learn how to do accurately are land navigation in a natural environment and orienteering while traveling over challenging terrain in uniform along with all of the equipment they are required to carry. Another feature of this training involves target practice with live ammunition with of some of the standard weapons that the US Army uses in combat. 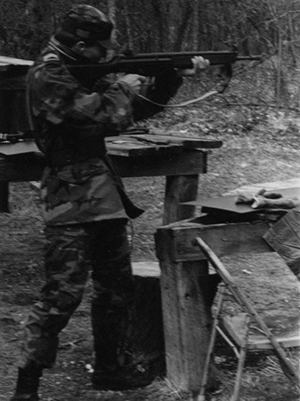 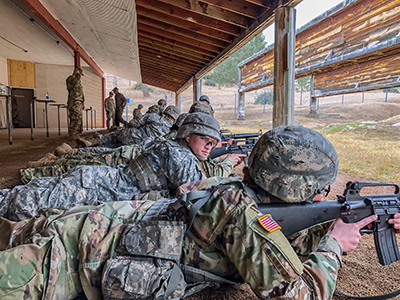 Cadets observe the quality of their marksmanship 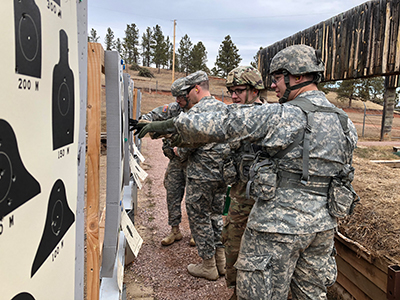 After the cadets have gotten a chance to practice and gain confidence in their abilities, they will compete as a group with other ROTC programs to see who is the best. 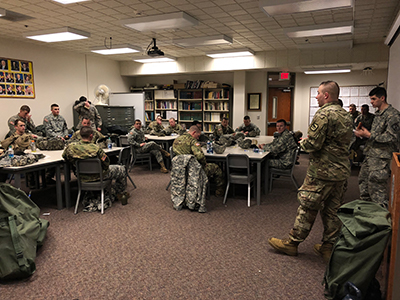 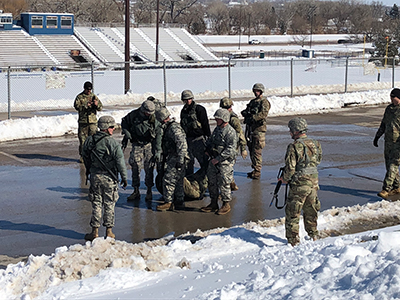 The Ranger Challenge is a competition amongst various ROTC programs. This is done to demonstrate and showcase which school’s ROTC program is doing the best. The school that does the best is recognized for their accomplishments. Some of the incentives for winning are name recognition and awards that give individual and institutional luster. Another great example is a scholarship for the top cadet in each of the events. The Ranger Challenge involves similar aspects of the field training exercise, as well as various tests and quizzes and numerous tasks relating to the training that they have received. Some of the categories that the cadets compete in are weapons assembly, one-rope bridge, land navigation, and a ten-kilometer road march. This event is designed to also see how well the cadets are doing in their training and if they are prepared to be future officers in the US Army.

The final main yearly event is the commissioning ceremony in which the proverbial light at the end of the tunnel is reached.

The commissioning ceremony is the graduating ceremonial event for those cadets who see the program all the way through from beginning to end. These cadets have also decided to sign a contract with the United States Army and the cadet has successfully completed the ROTC program. Through the ceremony they are now becoming second lieutenants in the United States Army, in which the road of their education will continue through the career path of an officer in the United States Army. This event is typically one of the most important and remembered events in an officer’s career partly because it constitutes the ending of one part of their training and the accomplishment of one mission. Also, the ceremony marks a true beginning as an officer of the United Sates military and the start of a new life and a journey into the unknown. 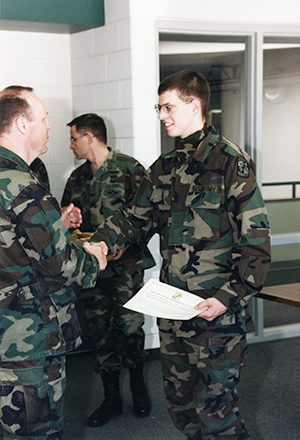 Cadet being commissioned as a second lieutenant 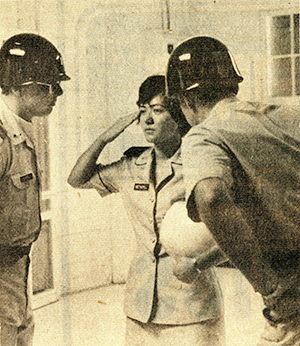 A special Thank You to the BHSU ROTC program for the donation of a number of great photos to the BHSU Library.