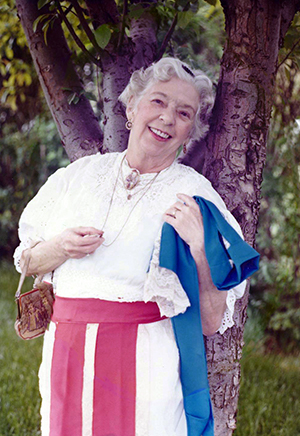 The First Ladies Doll Collection is temporarily off display due to the Library Renovation.

Mrs. Rachetts spent “the major portion of the year” completing the china reproductions of the First Ladies dressed in the gowns which they wore at the Inaugural Balls of the respective United States Presidents. The actual labor in creating the Dresden porcelain Ladies consumed nearly 18 hours a day over a six month period, starting in July of 1973. However, Mrs. Rachetts had been involved in the process of collecting necessary materials for the dresses for more that 20 years. The total collection of “Ladies” includes 43 wives and other relatives who served with the 40 Presidents from 1776‑1993. Mrs. Rachetts noted that various Presidents who served more than one term also had more that one First Lady due to death and illness.

It was Mrs. Rachetts´ wish that the collection be continued. Colleen Bennet (a former pupil of Mrs. Rachetts) has carried on the making of the Dresden porcelain dolls with the additions of Nancy Reagan and Barbara Bush. 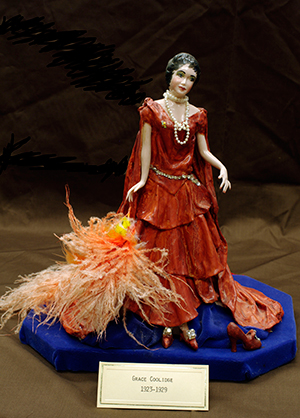 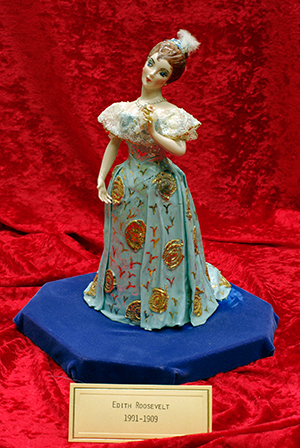 The porcelain figures are formed in several steps. First, flesh colored porcelain is poured into molds to form the hand, face, and torso. When “set” the pieces are removed from the molds and cleaned to remove the seam lines. One of the most sensitive parts is making the dolls´ hands, as they are extremely fine and are very delicate. 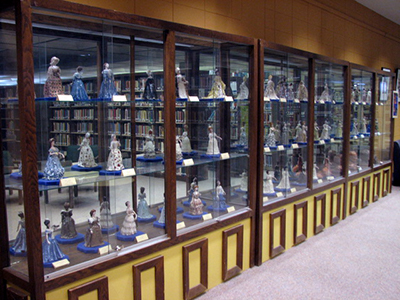 The dolls are dressed in sections. Pieces of the fabric, tissue paper, or lace are dipped in the appropriate colored slip and attached to the figure. The arms are dressed before attaching. The hair is styled from cotton, yarn, fringe, or string that has been dipped in the slip and shaped.

The doll is then given its first firing which brings out the colors. In this “bisque” form if is fairly fragile. A spray gun or brush is used to apply a finishing glaze. However, flesh areas are not glazed as they are a natural flesh color after the first firing. After glazing the figure, it is fired a second time. Final touches of gold, silver, etc., and facial features are then added, and the figure is given its final firing.

Mrs. Rachetts was a “proud, active Amercian.” The Alliance, Nebraska, native was a member of the All Angels Episcopal Church in Spearfish and played various roles in the famous Black Hills Passion Play. She became well-known throughout the Black Hills for her character role as “Poker Alice” during the annual Deadwood “Days of 76” celebration. In the many years which she served as the historic Poker Alice, Mrs. Rachetts greeted more than 150 foreign diplomats representing nations from every continent.